According to statistics from Age UK the amount of people over the age of 50 who experience loneliness is set to reach two million by 2025/6. That’s a whopping 49% increase in just 10 years! And with half a million older people going at least five or six days a week without seeing or speaking to anyone at all it paints a very depressing picture of getting old.

However, it’s not always as easy as being able to pop round and have a cuppa with your Grandma every day, or for your Grandad to take his daily walk out to buy a newspaper. Life is busy. Time is poor. And as we get older our physical and mental capabilities become such that the thought of leaving the safety of our home can feel daunting.

I live over 80 miles away from my 90 year old Grandad and so visiting him tends to be restricted to the school holidays. But I don’t want him to feel as if I don’t care and I also want him to be kept up to date with what’s going on in my life, so I made the decision at the beginning of the year to start writing him a weekly letter. I don’t expect or need a reply from him. I do it because I hope that by receiving my letters each week it gives him not only something to look forward to, but also an insight into what’s going on in the outside world. You see since moving into a care home late last year he has become very insular and rarely leaves his room. He could choose to have his meals down in the communal dining area, but he doesn’t. He could choose to leave his door open so that he can at least chat to his neighbours, but he doesn’t. He has a wheelchair and so could choose to be taken out by members of the family who live close to him, but he doesn’t. I don’t know whether it is because he can’t be bothered and has simply given up, whether he is in too much pain and so the thought of moving from his bed seems too much, or whether he is worried about falling or having some other kind of accident in public, but either way he is gradually spending more and more time shut away on his own. And that is why I feel it is more important than ever to keep writing, to visit when we can and to keep on trying to convince him to leave his room. 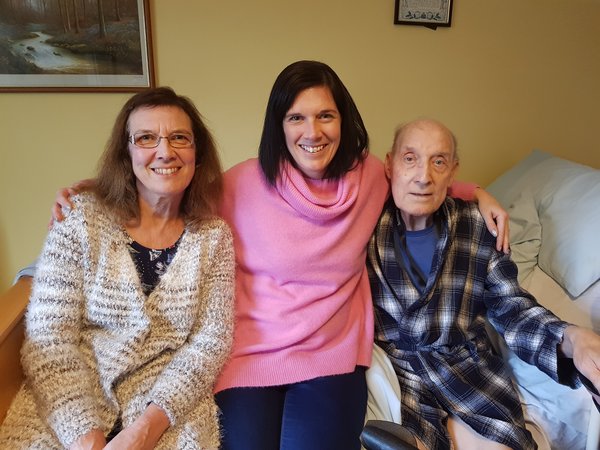 Myself, my husband, my kids and my mum recently visited him and I had already hinted in my letters that when we saw him the kids would like to get out in the care home garden so that he could show us around and we could look at the spring flowers and get some fresh air. I of course suspected that he wouldn’t want to and knew there would be very little hope of forcing him outside if he didn’t want to – old people can be proper stubborn when they want to be – but there was a small part of me that hoped he might be up for giving it a go. The power of kid persuasion and all that!

But as predicted we turned up and he was in no state to go anywhere. He did have clothes on at least, but he was in bed and had no intention of getting out of it despite a few gentle nudges. He assured us that when the weather warmed up he would get out in the garden over the summer, but we shall see… I suspect there will be some other excuse at the time.

I can at least take comfort in the fact that he has daily visits from the staff who bring him his meals and who help wash him. And my mum, aunt and brother visit him on a regular basis so he is fortunate enough to be getting some kind of human contact on a daily basis. He is safe where he is, he has staff on hand to help him, he has all the equipment, he has doctors that visit him if need be, and he has his personal belongings and photos around him. But it does still frustrate me that even though people are bending over backwards to help him, he simply isn’t taking the help and it kinda just feels as if he has given up.

My Grandad is one of the lucky ones, he has people who care. But what about the thousands of older people who don’t have anyone? What if they are well enough to not yet need to be in a care home, but their family live miles away and they don’t have anyone looking out for them? What if they had a fall in their home and needed help, who would they call, who would check in on them?

The fact of the matter is that life is busy and family life has changed. Families are more spread out nowadays and with more women working, kids having more activities at weekends, and many other commitments, it can make many of us feel guilty for not visiting elderly relatives more frequently and it does of course make us worry about them more.

So what’s the answer?

How can you ensure your loved ones are safe in such a way that it fits in with all of your lives? 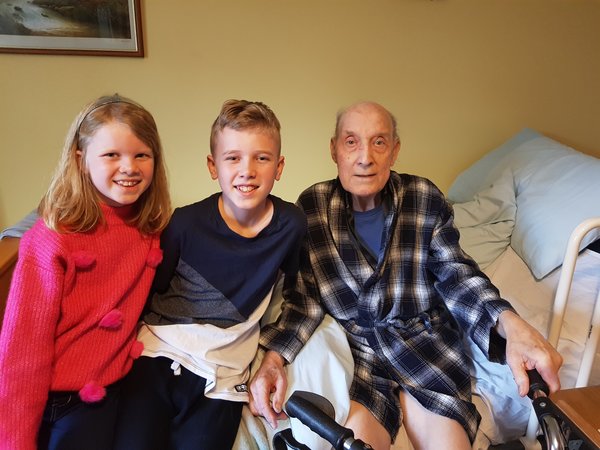 Encouraging your grandparents to get out and about has so many benefits. Not only does it give them the chance to interact with other people thus solving the potential loneliness problem, but it also gets them doing gentle exercise outside in the fresh air. Those two factors alone are so, so important for physical health and mental wellbeing and when it comes to older people the saying ‘use it or lose it’ couldn’t be more applicable. The simple act of walking to the shops, going out for the day with the family, or even making a trip to the doctors is enough to add purpose to someone’s day. And having a purpose is so incredibly important.

One thing that can prevent older people from going out is the worry about what to do if they have a fall and there is no one around to help. Or worse still, what if they’ve been out and return to an empty house and have a fall there. Who will help then?

According to a World Health Organisation report approximately 28-35% of people aged 65 and over fall each year and within this same age bracket falls account for 40% of all injury related deaths. That’s a shockingly high number for something that could so easily be prevented through the use of an emergency device. The Welbeing Lifeline pendant is one such device and means total peace of mind for everyone. It is connected to the emergency services as well as to selected family members and through just one simple push of a button it means help and support 24-hours, 365 days a year. That is an incredible confidence boost right, knowing that you can still do things for yourself, that you can have your independence and you can do the activities and tasks that you love. Just because you’re older does not mean you have to give up on life just yet, it simply means going about things in a slightly different way. Being open to change, being willing to accept help. Something that perhaps some older people may need a little persuading of 😉

I cannot think of a better way to show you care than by equipping your loved ones with the tools they need to carry on living the life they want to lead. If you can’t physically be there yourself, then making sure they are looked after is the next best thing. Sometimes you simply can’t be there. Sometimes they probably don’t even want you there. But older people, just like anyone else for that matter, need company and they need to know that there is someone out there who cares, because otherwise what’s the point.

It’s just not possible for me to visit my Grandad more than I do, but through my weekly letters I hope that it at least brings some level of joy to him. If he’s not going to leave his room and socialise with the other residents then I will damn well bring the outside world to him through my words!

If we can give him something to talk about other than the pain he’s in and how much it’s costing him to be in the care home, then we’re winning. My childhood memories of him are filled with the frog song, Zulu, faggots and peas, the urdy gurdy, counting coppers into plastic money bags, a hanky on his head and those little packs of cards you used to get in PG Tips. Unique personal memories that will be with me forever.

My Grandad the train lover, the best onion pickler around, grower of the juiciest plums. I live far away and yet we will always be connected. It is up to us to close the distance in whatever ways we can. 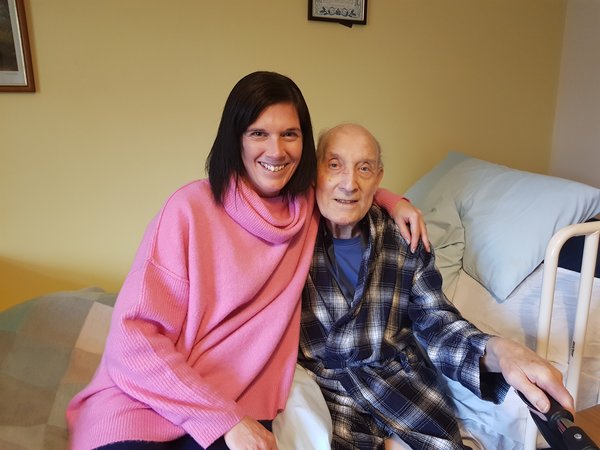