As you probably already know, because I’ve totally been bleating on about it ALL the time, I recently took part in the Disneyland Paris half marathon. I’ve already written up my personal account of how I got on in the race, which you can read here, however whilst I was there I couldn’t help but notice that there are distinct groups of runners; you could literally put them into 8 different categories. You see I’m a bit of a people watcher and I notice these things. So purely for the fun of it, I’ve put together my observations and come up with a list of the 8 different types of runners you’ll spot at the Disneyland Paris run weekend.

Right let me start by saying that I’ve got nothing against people walking at certain points during a race if they feel they need to, especially when it’s a longer distance. But I have a got a huge problem with people walking the whole damn thing. This is a run people, not a flippin’ walk. And yes, I kid you not, there were people who walked the whole damn half marathon. From the moment they crossed over the start line to the very moment their feet walked over the finish line, they walked.

I just don’t get it.

Plus in my eyes they don’t really deserve a medal. I mean most people are capable of walking a half marathon, it’s hardly the biggest challenge of the century so why should they be given exactly the same medal as the ones that have run it?

Again… I just don’t get it!

I want to see effort being made. I want to at least see people running over the flippin’ start line. And personally if people aren’t even capable of running 5K then I don’t reckon they should be there!

Why oh why would you enter a Disneyland run event when all you’re gonna do is take things seriously and not enjoy it!?! I mean heavens forbid you even think about wearing a costume, because jeez that would just slow you down; those Mickey Mouse ears aren’t exactly aerodynamic you know. You can spot the serious runners a mile off (well, you can’t because they’re already way head of you, but you get my gist). 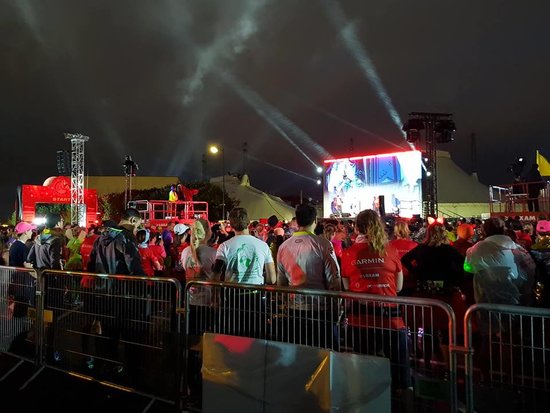 They’re the ones in the shortest shorts, the tightest vests, the slickest running shades to help them avoid eye contact with anyone that might distract them and so that they can cast a sneaky glimpse at any potential competition. They’re the ones limbering up, doing deep squats and lunges while everyone else is stood around chatting about which character they’re gonna get a photo with and what to have for breakfast back at the hotel after the race. They’re the one’s at the very front of the pack, the one’s who will do anything to force their way to the front of the start line, the one’s who look down their noses at us mere ‘fun runners’. They’re in it to win it and woe betide anyone or anything that gets in their way. Watch out Mickey!

The ‘Doing It For A Good Cause’ Runners

These are the runners doing their bit for charity; raising money for a good cause. I salute you – you’re doing something challenging to show your support for something close to your heart. You’ll spot them because they’ll be the ones wearing t-shirts with their chosen charity emblazoned across the back. But the thing is at Disney you don’t just get the runners running for charity, ohhhhhhh no, you also get the ones who are dedicating their run to way more far out there causes.

Two of the ones that spring to mind from when I took part include:

There’s always one isn’t there, but in this instance there were hundreds of them. And no I’m not some goody two shoes, must abide by every rule in the book angel myself, but the rules are generally there for a reason and it’s annoying and quite frankly unsafe when people don’t stick to them!

Take for example the runners who decided it was perfectly acceptable to swoop across my path without even looking and certainly without following the rules of ‘raise your hand if you intend on stopping and shout “left”‘. Which meant I had to do some ridiculous Riverdance-esque trot while yelping and shooting them evils, all because they wanted to high five someone in the crowds. Brilliant… just brilliant! 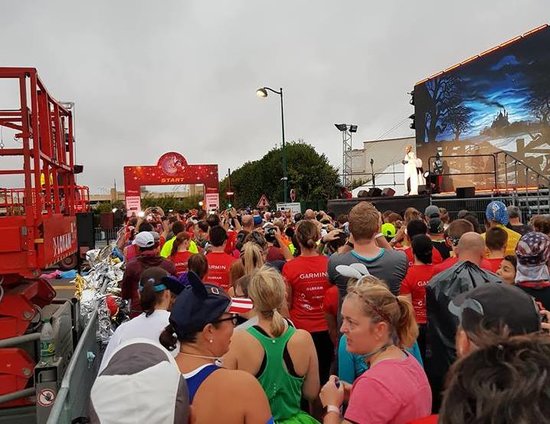 Then there were the runners, who irrespective of the fact that the information email which had been sent out in the days leading up to the event had clearly stated that the use of selfie sticks was not allowed during the race, insisted on using them the whole way round because heavens forbid they miss an opportunity for a selfie the vain so-and-so’s! Which of course meant they weren’t paying attention to what they were doing, it was all ‘me, me, me’, and consequently put anyone running even remotely close to them at risk of having an eye out or at the very least being clobbered round the head.

Then there’s the whole nipping in, out and between runners to over take. I get that not everyone runs at the same pace and I get that it’s frustrating if someone’s plodding along in front of you making it difficult for you to get past, but haring through like some demented road runner just ain’t safe. It’s simple, the rules state to overtake on the right, so will you please damn well overtake on the right. And all you slower runners, don’t think you’re not to blame either because firstly you’re supposed to run on the left so that these people actually have room to overtake on the right, and secondly it is downright selfish and annoying when you run four abreast, oblivious to anything other than you and your mates’ chit chat about eyebrows.

Arguably the most annoying group of the lot, the stop starters. They’re the ones who want the best of both worlds: they want a good race time, but they also want to stop for every possible photo opportunity. And because having your photo taken with the characters involves stopping and queuing and wasting precious race time, when they’ve eventually been snapped they tear off winding their way in and out like loons only for you to catch up with them at the next photo stop. 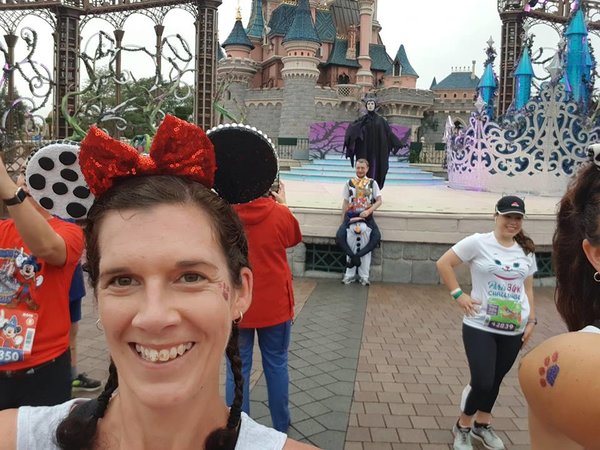 Or you’ve got the ones who literally have no idea whatsoever about pacing and so they sprint off at the start, only to get to a slight incline and then they’re walking. They get past that and then they sprint off again, only for you to catch them up because you’re going at your steady evenly paced run and they’ve yet again burnt out and they’re hobbling along wheezing like an asthmatic goat and looking like an overripe beetroot. Pacing people…. PACING!

They’re the ones who eat, sleep and breathe Disney. They know all the words to all the films and songs, own the complete back catalogue and own pretty much every bit of merchandise going. They’re the ones that go weak at the knees at the sight of Mickey (you do realise it’s just someone dressed up right!?!) the ones who take costumes to extremes and the one’s who may not have ever run in their lives before but they simply have to do the Disney run.

And granted, their costumes are good, like really good. The couple dressed as characters from the film ‘Coco’ done out in face paint and carrying props and playing music… genius! And the woman dressed as a character from the film ‘Up’ with actual helium balloons tied to her hat, again pat on the back for effort… although perhaps not so great for the runners whose faces you whacked said balloons in hey!

The medal(s) you get from a Disney run are lush there’s no denying, they’re big, they’re weighty and they look incredible. So of course there is huge appeal to the runners who run because they like adding more weight to their medal racks. Like crazed magpies these runners will do anything to get their hands on the shiny prize and even if it half kills them they are determined they’re going to make it over that finish line!

The RunDisney event has a selection of different races across the weekend each one involving its own specially designed medal. And for the real medal aficionados there’s the opportunity to do all of the races and get an extra special ‘woo look at me I did them all’ challenge medal. Which is all great and lovely and everything, but what it does mean is that you’ve got runners who in all honesty simply aren’t physically capable of running these kinds of distances back to back, so then they walk it (see ‘The Walkers’ above). Which is annoying and, as I’ve already raged about, in my opinion means they don’t even deserve to get the flippin’ medals!

Me. This is me.  I 100% put myself in this category. It’s the runners who need to prove, often to themselves more than anybody else, that they can do it. In my case this was about clearing up some beef I had with half marathons after a not so good attempt with my first one last year. Needless to say it worked and I completely got over my ‘issues’.

The runners who have a point to prove are the one’s who don’t necessarily struggle with the physical side of running, but more the mental side. We’re the ones who beat ourselves up in our heads for not being good enough/fast enough/far enough etc. and judging by the gurny looks on some of the runners faces during that race, there were definitely a lot of people out there trying to prove their point! 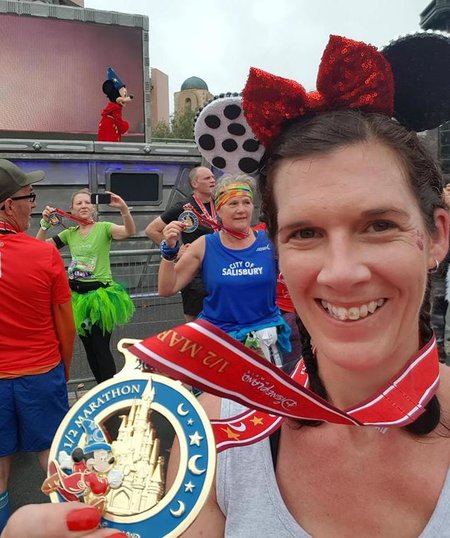 Look, I realise that a lot of this is hugely stereotypical, and yeah OK so it’s all a bit tongue in cheek and sorry if I’ve caused any offence – although let’s face it if you’re offended it’s only because you recognise yourself in one of these categories 😉

I would love to know whether you have encountered any of these ‘types’ of runners in any Disney races, or indeed any running events you have taken part in, or whether there’s a category I’ve missed out. So please leave me a comment below 🙂

Most people start working out with full-on enthusiasm, but slowly, with time, they lose interest, or it gets too monotonous for them to stick…