At the age of 42 and having experienced symptoms of the perimenopause for the past two years, I finally got what I’d been hoping for. The holy grail of perimenopause treatments… HRT (Hormone Replacement Therapy).

This was three weeks ago, and whilst this is clearly too short a time to expect to notice any vast improvements, I have noticed a few changes which I wanted to share with those of you who are interested in following my journey with this. But before I do, let me first tell you about which HRT option I decided to go with.

Which HRT Did I Choose?

When I had my consultation, the doctor talked me through the various options available to me, carefully explaining the pros and cons of both, as well as talking in great detail about some of the risks associated with them.

I was given the choice of either the patches (Evorel) or the gel (Oestrogel) and having done a bit of prior research, I was initially drawn towards the patches. I’d spoken to friends who used and raved about them and to me they just seemed like the easier and more practical method. I liked the fact you could just bung one on, then forget about it for a few days, even leaving it on in the shower etc. However, in the end I decided to go with the gel, my decision swayed by the ease at which the dosage could be increased or decreased.

When you first start with HRT you’ll go through a bit of a trial and error stage where you and your GP try to work out the best dosage for you. If you choose to go with the patches, you’ll be prescribed one of the following packs:

Which means if you’ve been prescribed 3 month’s worth, but after 1 or 2 months it feels like the dosage isn’t quite right, essentially the rest of those patches are going to waste. And that didn’t sit comfortably with me. I mean this is pricey stuff, that many women are desperate to get their hands on, so to potentially risk binning some of it, yeah it just wasn’t right for me. So, because of this, I decided to opt for the gel. This is a lot easier to increase or decrease the dosage. I’m currently on two pumps, but this can be tweaked anywhere from 1 pump up to a maximum of 4 pumps, so none of it is gonna get wasted.

In addition to this, I was also prescribed progesterone tablets (Utrogestan) which is really important for women who are still getting periods and are also taking some form of oestrogen. Oestrogen based HRT can stimulate the growth and build-up of the womb lining (endometrium) and this has been shown to increase the risk of developing endometrial cancer. Progesterone counteracts oestrogen’s effect on the womb lining and encourages it to shed in the same way it would when you have your period. These pills are taken for 2 weeks of your monthly cycle, 14 days after the first day of your last period. So, it takes a bit of tracking, and if you’re periods are all over the place like mine, it’s not the easiest thing to work out, but it is a really important component of this type of HRT. 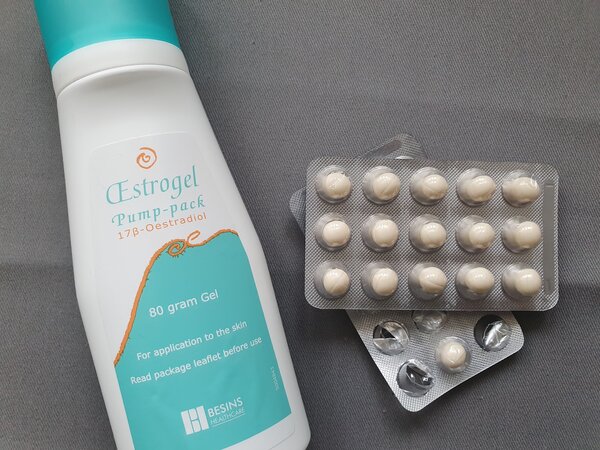 What Changes Have I Noticed After Being On HRT For Three Weeks?

As I’ve said, it’s early days, and before I get onto what changes I have noticed it’s perhaps a good idea for me to tell you about the symptoms I was experiencing. If you Google search ‘how many menopause symptoms are there?’ you’ll get a whole host of different answers ranging anywhere from 34 to 66 and counting. Basically, there’s loads of them, and while there are some that are more commonly associated with what we have come to think of as classic menopausal symptoms, there are some that might surprise you.

I think it’s important to make clear here that because the list of symptoms you may experience during the perimenopause are so vast, it’s worth bearing in mind that it could be something else. Which is why it’s important you keep track of your symptoms (I use the free Balance app) and talk to your GP as a first port of call. I’m going to do another post on perimenopause symptoms but for now I’m going to tell you about the ones I have experienced over the last two years:

So, as you can see, I had a lot going on. I guess the most confusing thing for me was that a lot of these symptoms could easily be explained as something else. And I kinda get why I was initially prescribed antidepressants by my GP, after all my blood test showed up no irregularities and yet there I was suffering a fair few mental health issues. Throw a pandemic into the mix and the part that plays in terms of anxiety etc. well yeah, I get it. But I do feel let down. I’d done my research, I’d been tracking my symptoms and periods, I’d read the books, I’d spoken to my mum about her menopause experience, I felt about as informed as I could possibly be. So, to be palmed off with antidepressants and evening primrose tablets, when I knew deep down I needed more, I felt unheard and unvalidated. Even now when I look at the list above it shocks me to think about how the hell I was able to function with all that lot going on. Not gonna lie, it was bloody miserable.

Which is what then prompted me to go private and seek a more expert opinion from a menopause specialist. Best thing I ever did. Finally I felt heard. Finally someone was listening to me. In the space of 10 minutes, in which time I literally got everything off of my perimenopausal aching chest, I had been prescribed HRT.

So, here I am today having been on it now for three weeks. I rub the gel into my thighs every night before bed and I’m on about day 5 of the progesterone tablets, which I also take before bed. The most dramatic change I’ve noticed so far is that my night sweats have gone, which is a huge relief let me tell you. It was never so bad that it woke me up in the middle of the night, but I used to wake up every morning virtually drenched, and it proper stank (actually that’s another symptom, my body odour has changed). Since starting HRT however, touch wood, cross my fingers and anything else that is gonna give me the luck, I have not woken up all sweaty and stinky. And you know what? As a consequence, I think I’m getting better sleep too, which I never really considered to be that much of a problem. I fall asleep easily (albeit early), sleep right through, and wake ready to jump out of bed. But one thing I have noticed since using HRT is that I have more energy in the day, and I can only equate that to getting better sleep overnight and not waking up quite so early. Don’t get me wrong I am still very much an early riser, but gone are the days of me waking up at a time beginning with a 5 – sometimes I even sleep in until my alarm goes off, so seriously folks this is progress.

From the mental health side of things… well it’s difficult. Times are tricky at the mo, I’ve got stuff going on that I need to keep private and to be honest no amount of HRT is gonna fix it. I’m a work in progress, so it’s a watch this space from that side of things. And as for my periods, again difficult to say, as I haven’t come full circle yet. One of the side effects of taking HRT is that it can cause bleeding, and this can be the case for the first 3 months before things start to settle down. So, I can’t tell you what my periods will be like, but I shall deffo keep you posted on this as I am hoping they will settle down into a much more manageable pattern.

Another thing that I noticed, and this was again more so in the first week, was that my appetite dropped and my sugar cravings disappeared, which let me tell you is most unlike me. Whereas before, I was grazing throughout the day, reaching for anything that contained sugar, all of a sudden that urge just wasn’t there anymore. It has since started creeping back in, but I am definitely not picking at food as much in the daytime as I was and I’m wondering if this is also a knock on effect of feeling more energised. I no longer feel the fatigue that I was and so don’t have that need to find my energy from food… I don’t know, but there’s definitely something going on.

That’s pretty much it for now, I’m still tracking my symptoms, and actually as I type this I realise that I haven’t really been thinking about the vast majority of these symptom over the past few weeks. Which is making me think that perhaps they have eased, because I guess in some respects you only really pay attention to things when they’re there.

The next step is to continue as I am until my 3 month check up with the Bupa menopause specialist who will see how I’m getting on and check whether any tweaks need to be made. But until then I shall keep tracking, keep talking about it, and keep that conversation going.

No matter whether you want to lose some weight, maintain a healthy weight, or improve your lifestyle in general, creating a balanced diet is…