Humans have always displayed a tendency to eat even when there is no physical hunger. Even though there are several reasons for this action, many people do it as a means to relieve stress and that’s where emotional eating suddenly steps in. In this scenario, a common habit would be to load up on sweets and junk food since they are unlikely to feel hungry after eating. Such unhealthy food can end up having a small impact on improving mood, but they can have a lot of negative impacts in several ways.

Emotional Eating Can Be Stopped. Here’s The Solution

It is easy to reach for the ice cream scoop when in a bad state of mind, but those individuals fail to realise that emotional eating does not provide any solution to the problem. Let’s see how to solve the issue.

Individuals can experience stress in multiple forms. The acute form of stress comes when a person loses a loved one or even a job. This can be quite temporary and very occasionally. A more dangerous kind of this problem would be chronic stress, which is available when a person is in a marriage that he/she doesn’t like, if they hate their job, or if they do not have sufficient money for paying bills.

Even though there are underlying reasons for an individual consuming food even when they are not hungry, it is possible to limit the situation by setting up a schedule. This can be highly effective, just like it can prevent people from spending a lot of time on addictive games like Book of Ra. The program can even include snacks to appease the urge for a short while. Any irregularity with eating habits is a recipe for disaster since it can lead to overeating and random eating. Many people tend to have three meals per day and at least two snacks at various points. The real hunger always starts only three hours after the consumption of a meal. During this period, you can opt for a small snack to keep the body in a sufficient state.

Once the eating times have been regulated, the schedule can also help adjust any eating patterns to avoid problems. It can also provide freedom from emotional eating. For example, eating very late into the night or avoiding breakfast can lead to irregularities in the body. The creation of a schedule can help avoid such inconsistencies. It can also help people to lose weight that they have inadvertently put up due to bad eating habits.

Distraction is often looked down upon in our society. It is seen as a sign of poor concentration levels and bad behaviour. It can be a problem in almost every walk of life, as a lack of focus on a specific task can lead to failures regularly. However, such a character could actually benefit individuals who are trying to keep away from emotional eating. Instead of focusing on having junk food as a way to reduce stress, distraction can be a great weapon to control your emotions. It can help shake up thoughts and end any ideas of a snack that can be munched mindlessly.

If an individual is not distracted from their task at hand so quickly, it is imperative to bring about this habit – at least to prevent overeating. This can be done by writing down a list of five items that can help calm you down. For example, you can write five people who can be called when under a period of stress. 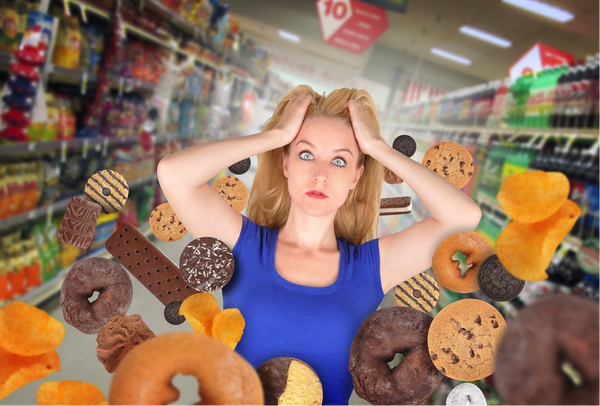 Every week, a person who has a problem with emotional control can chart out a map where they are expected to travel over the next week. This map will include workplaces, entertainment options, and potential detours. For example, the map may consist of visits to the workplace, doctor’s appointment, movie night, a trip to the mall or supermarket, and more. Now, there will be enough data to identify places where emotional eating is highly likely. For example, a movie night can often be associated with emotional eating since there are several options to grab a doughnut.

If there are signs of stress eating at a specific place, they can be avoided. One can also add places where a healthy food option can be procured. The availability of a menu on a map like Google maps or similar platforms makes it easy to decide if a particular restaurant offers a healthy option.

An individual who can’t stop eating is likely being subjected to a lot of self-criticisms. They are likely to encounter an inner voice that keeps telling them that they are a failure who cannot do anything right. Over some time, these fleeting remarks by their mind ends up being like acid rain, which keeps pouring over the head. This would gradually erode their brains of self-confidence. Such individuals have significant trouble in avoiding the consumption of food even when they are not hungry. One way to prevent this problem is by avoiding self-criticism and shifting the criticism by going into a third-person mode.

For example, Lebron James infamously decided in 2010 to avoid addressing in the first person whenever he made a mistake. In such situations, he agreed to go to the third person by referring his own name.

A common reason behind stress eating is the feeling of insufficiency within oneself. Eliminating this tendency can be a great way to solve the problem of emotional eating. It is very easy to feel agitated when there is a lot of denials. This agitation can lead to higher levels of depression and stress. Once a person starts to feel low and anxious, they inevitably turn to food as a way to get better and feel normal again. This is due to the sugar spikes that would come as a result of excessive consumption of food. You can prevent this by avoiding agitation. It is easier said than done, but the process of accepting oneself and their failures can be a great way to reduce stress.

Rather than focus on the negative things, a person can also look at their positives.

All these steps can help eliminate the problem of eating, even when the body does not feel hungry. This is one of the most dangerous situations affecting humans, as it is easy to put on weight when people go on such binge eating routines. Once emotional eating is eliminated, people can look forward to building a healthy lifestyle.

What’s your opinion on emotional eating? Let us know in the comments!

Thomas holds a bachelor’s degree in psychology from Columbia University. His practice is in New Jersey, and he frequently writes about the relationship between stress and self-destructing behaviours.

There are a lot of challenges we face when we start a new workout routine. One is figuring out how to fit in our…