The advice you’ll hear from many sources is that grilled food is a much better dietary choice than the fried version, which is only one of the appeals of it. Throwing a barbecue can actually be a lot of fun and can easily turn into more than just preparing food, but rather a social event. However, if you want to fully enjoy all the benefits of grilling, here are some things you can do to make it as healthy a choice as possible.

When it comes to grilling, there are two potentially harmful compounds you want to avoid, polycyclic aromatic hydrocarbons (PAHs) and heterocyclic amines (HCAs). When you grill meat, the fat from it drips onto the coals, forming PAHs and creating flame-ups, which then causes the PAHs to rise and deposit on the charred meat. Similarly, when you grill or broil certain types of meat, HCAs get produced. You can avoid the effect of these compounds by eating grilled meat in moderation, or you can simply reconsider what kind of meat you’re grilling. For example, you’ll make a healthy decision by choosing lean pieces of pork and beef, with the skin and visible fat cut from it. Or an even better choice is to go with chicken or turkey breast, which is a lean protein.

Before you get down to the grilling, make sure your grill is clean. How to clean your grill? The easiest way to keep it that way is to scrape it down after use, so that the harmful residue doesn’t build up and transfer to your food once you throw a barbecue again. Another good tip would be to cut down on the grilling time, so that your food isn’t exposed to smoke and flames for longer than it should be. You can achieve this by grilling fish, which can be done much sooner than other types of meat, or by grilling smaller chunks of meat. You can put your meat, vegetables and mushrooms on skewers, or even pre-cook it in a microwave before grilling it. You can also make your meal healthier by lowering the grill temperature, which will keep the burning and the charring to a minimum. This is easy to achieve if you upgrade to a proper appliance, such as the state of the art napoleon grills, which can read the grill temperature accurately and display it clearly on its front. Finally, to avoid the flare-ups and protect the food from smoke, use some foil underneath it while grilling. 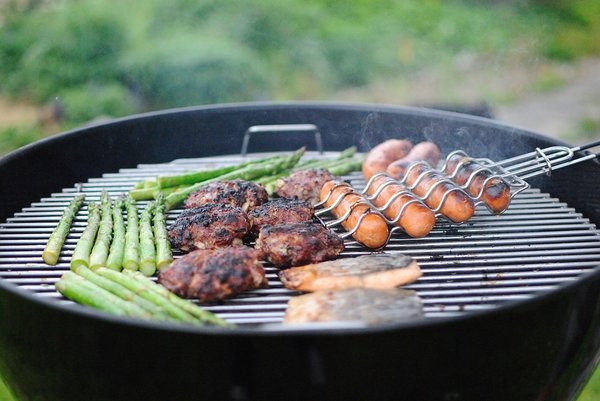 The Power Of Marinade

Most grill masters soak their meat, and anything else they grill, in a juicy and delicious marinade before lighting up the barbecue, in order to add some flavour to it. Some of the best marinades contain wine, lemon juice, vinegar or soy sauce, along with honey, onions, garlic and various spices. The healthier version of marinades will be low-fat or even fat-free, so as to cut back on some calories, but also avoid fat dripping on the charcoal and the HCAs that go with it. If the marinade contains oil, make sure it’s olive or canola oil. Marinate your meat for about 2 hours or longer, and your fish and vegetables for about an hour, keeping them in the fridge during that time.

Meat isn’t the only thing you can grill. When cooking on a barbecue, you can also toss in some fruit and vegetables, whether as an option for vegans and vegetarians or as a side dish with your meat. They have great nutritional value and can add some tasty variety to your grilling. Not only can they help you reduce the risk of obesity and cardiovascular diseases, but you’ll completely avoid PAHs and HCAs, since they only form on meat, and not grilled fruit and vegetables. You’ve probably tried grilled bell peppers, onions and zucchini before, but you shouldn’t miss out on just how delicious grilled fruit can taste either, which is why you should give apples, pears and mangoes a chance.

So if maintaining a healthy diet is important to you, don’t hesitate to enjoy a nice afternoon next to a barbecue and indulge in some savory food straight from the grill.

is a full time mom of two beautiful girls interested in business and marketing related topics.

In her free time she enjoys exercising and preparing healthy meals for her family.

The gym is a great place to go to strengthen your body and relax your mind. That means it is great for both physical…