If you tap the words ‘childhood obesity UK’ into Google, the number of articles that come up is crazy. It is big news – our children are getting bigger and it is up to us to do something about it!

A report published by the Royal College of Paediatrics and Child Health show that if the current trends continue to grow at the rate they are, by 2030 approximately 23% of 11-year-old-boys will be classified as obese; a rise of 13% since 2016. And the stats continue, with current estimates suggesting that almost a third of children aged 2 to 15 in the UK are now overweight or obese.

How has it got this bad?

Everyone’s keen to point the finger at someone or other; it’s the soft drinks industry, it’s the fast food industry, it’s social media, it’s video games, it’s the parents. And sure all of these of course have a part to play, but rather than apportioning blame, perhaps we should be focusing on what we can do about it.

At the moment school children have their height and weight measurements recorded in Year R (age 4 to 5) and in Year 6 (age 10 to 11). However, experts such as those at the Royal College of Paediatrics and Child Health are now calling for children to be weighed every year between the ages of two and 18 in a bid to prevent what has been described as, ‘a looming obesity timebomb’.

Dramatic maybe, but this is a problem we cannot and should not hide from. Children are becoming obese much earlier and are staying obese for much longer. Now whilst the biggest concern is clearly what impact this has on a child – according to a paper published by parliament they are more than twice as likely to die prematurely as a result of their weight – there is also the implications of how this affects the NHS. It is estimated that the NHS spent £6.1 billion on overweight and obesity-related health problems in 2017/18, which is more money than the Government spent on the police, fire service and judicial system combined.

What Can We Do About It?

There’s no quick fix solution to this and we can’t just wave a magic wand and make this miraculously disappear. Ultimately, it is about education. Teaching children and parents about the importance of nutrition and exercise is absolutely key.

It is widely recognised that the children of today do far less exercise than previous generations. The lure of a screen, be it watching TV, playing video games, messaging friends or using social media has resulted in children becoming more and more inactive. But this inactivity also affects nutrition, as according to research by Cancer Research UK children who use the internet for more than half an hour a day are almost twice as likely as those who don’t, to ask their parents for chocolate, crisps, sugary drinks and takeaways. And primary school children who spend more than three hours a day online are more likely to spend their pocket money on these high fat and high sugar products than those who are online for less than 30 minutes.

So perhaps more should be done in trying to wean our kids off screen time and perhaps us as parents should try harder to not always rely on the ‘electronic babysitter’. Trust me, I know that’s easier said than done!

Nutrition is a big factor in this and the government’s sugar tax has made attempts at trying to combat the problem. But what our children eat, certainly when we still have a say in what they eat, is down to us parents. What we put in their lunchboxes, what we serve them up at dinner time, what we bring them for an after school snack has an effect not just on their weight, but also on their relationship with food. As we all know, children watch and notice everything. So if they spot you troughing a family sized bar of chocolate, they are absolutely going to copy you! We as parents have the responsibility to be good role models for our children. They learn through our habits – both the good and the bad ones!

Food clearly isn’t the only problem here though, movement and exercise also plays a big part. I’ve noticed myself how many children travel to school in the car instead of walking. And whilst I understand that it is not always possible for parents to walk their kids to school, I also believe that there is a certain level of laziness involved too. Again, what kind of lesson are we teaching our children about how to fit easy movement into our day!?!

One way of getting children moving is through the government initiative, the Daily Mile (or Golden Mile as it is known in some schools). This activity requires children to run or jog at their own pace for just 15 minutes a day, every day. The beauty of it is that this is something that everyone can do, no matter age, sex, fitness level and it benefits both physical and mental wellbeing. Running is a fantastic exercise to help children set their own goals and targets, to show them what their bodies are capable of and to allow them to take pride in how their bodies move and work. It releases those feel good, mood improving endorphins, it reduces stress and anxiety, it clears the mind and makes it more productive, it improves creativity, it promotes positivity and pride.

I believe it is important to teach children about the value of healthy eating and regular exercise and showing them how eating the right foods can help fuel the body to allow it to perform better. By doing this we are educating and empowering our children to view their bodies differently – not by how they look, but how they function. And that has got to be a good thing right?

What Can You Do To Help?

I believe passionately about this, which is why I am helping my kids’ school with a project to install an all weather running track on their school fields. This is a huge and very expensive project, for which we are still in the process of raising funding for, but it is one that will help generations of children become fitter… not fatter!

To find our more about this project please take a look at the Running Track for Herne Juniors Facebook Page and to help us get votes for funding please head on over to our Aviva Community Project Page and place your 10 votes before 11am on Tuesday 20th November. 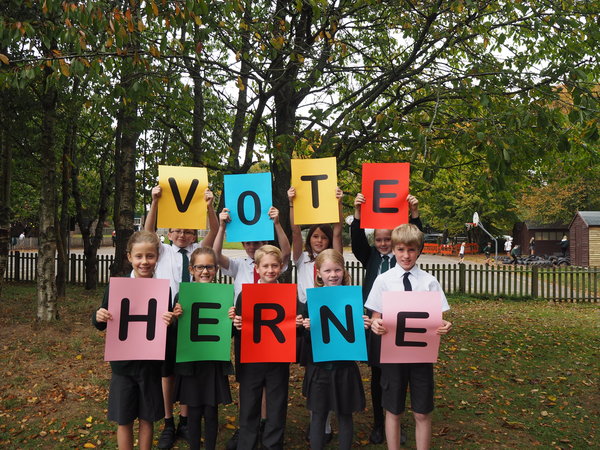 If you find that you wake up one morning and have a painless little bump under your skin, this is called a cyst, and…