The after school snack is serious business. Unless you want to suffer the wrath of a hungry, tired child you’d be absolutely out of your mind to turn up at the school playground without being armed with food. But what you choose to give your child after school is also really important, as their energy levels are flagging and so they need something that’s going to keep them going until dinner time, yet doesn’t hit them with a sugary surge of energy that sees them crashing down into a moody mess the moment you set foot in the door.

Munchachos is a new snack subscription service aimed at kids, a bit like Graze but more fun, more interactive and with a cultural educational twist as well. Taking inspiration from world cuisines each box comes equipped with 5 snack packets, or Munchables as they like to call them, which ensures you have a nutritional snack for every single school day.

My kids, Fin aged 10 and Flo aged 9, both received a box containing the following snacks: 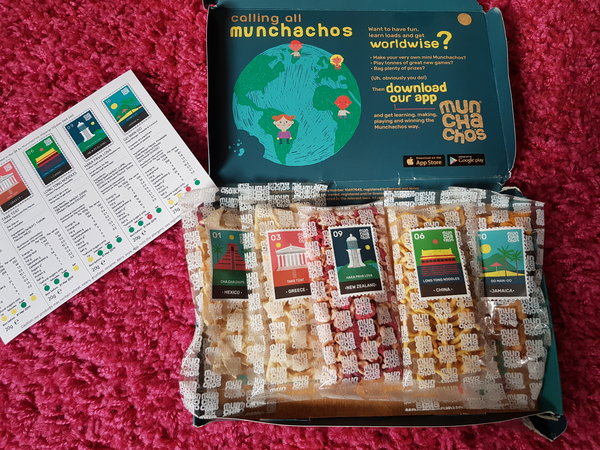 Now interestingly, I thought they would be ALL over the sweeter options, however they actually turned their noses up at these saying they were too sweet and they didn’t like the texture. I reckon if I sprinkled them on cereal or on top of some muffins they’d totally go for them, but I must admit it was a total smug mum moment knowing that my kids had picked the healthiest options of the lot!

The nutrition content is really easy to understand through the use of the traffic light system, and for the most part the snacks fall into the healthy green light category. The fruit ones come up high on sugar, but this is down to the natural sugar from the dried fruits and I think if you have a child with a sweet tooth it is obviously a far better option than giving them a chocolate bar. The noodles and pitta pieces come out on top in terms of nutritional content and these were the ones that went down the best with both my kids. Flo, who is notoriously fussy with food, loved the Chinese noodles stating, and I quote:

Gotta love a snack that looks like a lizard tongue right!?!? 😉

Aside from the snacks themselves, there is also a big emphasis on getting kids excited about trying new flavours and foods, as well as teaching them about the different countries of the world and the foods associated with them. You can download an interactive app which enables your child to keep track of the snacks they have eaten by scanning the country labels on the front of the packets. It is free to download and once the kids have scanned in their labels they unlock a sticker which can be used to create their own personal Munchachos town. The one downside is that the stickers reset themselves after a week, which my kids have said they feel annoyed about as it feels like they’ve earned something that then gets taken away from them. Perhaps a better idea would be if they could keep them in a folder and build up their collection with incentives in places once they have gathered a certain number of stickers per country. There does appear to be badges that can be collected e.g. collect 8 landmarks, get 150 quiz points etc. but I’m not actually sure you get anything other than the badge becoming coloured in upon completion.

There is also a world based multiple answer quiz which my 9 year old found quite tricky and if I’m honest I even found tricky myself. But it did spark interest and it did create conversations we may not necessarily have had before, so I definitely feel as though both of us learnt something from it.

It’s tricky to establish what age the app is aimed at – the sticker town building side of things appeals much more to the younger kids (my eldest wasn’t interested in the slightest and my youngest liked doing it for a while but got bored quite quickly) and the quiz questions are quite difficult so I can’t see that appealing to younger kids as much. The idea of having an interactive app to create a fun attitude towards food is absolutely fantastic, I just feel as though it is a work in progress and a few tweaks could be made. 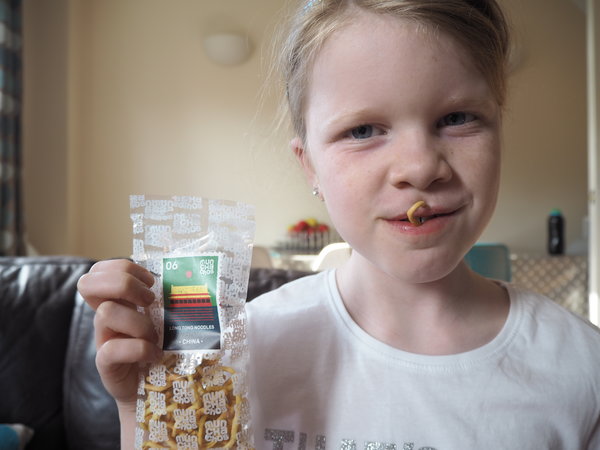 I love the convenience of food coming straight to your door, heaven knows I love anything that just ‘arrives’ without involving me having to think about stuff too much. And the kids loved receiving the brightly coloured letter boxed size parcels, even more so because their names had been hand written on them – it made them feel very special.

I love the variety, the concept, the taste, the fun element; that’s all absolutely fantastic. But I do have a slight issue with the price at the moment because at £4.99 a box plus postage, and especially when you’ve got more than one child all of a sudden it starts to get a bit expensive. It would be great if the company could offer some kind of discount for the second, third, fourth child to help finances a bit or maybe some loyalty card system, for example buy three boxes get your fourth box free, or recommend a friend and get a discount. I get that these companies need to make money and sub boxes ain’t cheap to produce, but it needs to be priced at a point that families can sustainably keep on being able to afford paying for them. So it would also be great if there was an option to pay for a month in advance at a cheaper price or even 3 months and 6 months. That way it helps the company out by getting the fees up front and the customers are happy that their loyalty and commitment has been rewarded. With a few thoughtful considerations to price it would mean that no one misses out on the Munchachos munching, healthy eating should be available and accessible to all, after all.

There are currently 12 different country themed snacks on the site, but Munchachos are always looking for inspo and welcome new ideas, so it’s worth checking out the Munchachos Facebook page or sending them a tweet with your ideas. 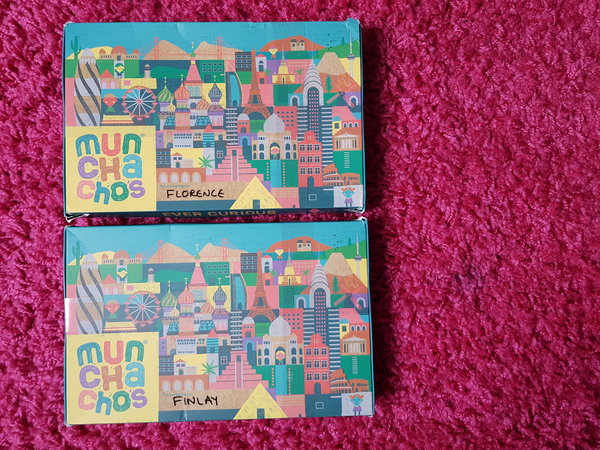 I mean, I was basically made for inventing stuff like this right 😉

Congratulations. You’ve just passed your test. Now the actual learning experience can begin! But when it comes to going solo for the first few…