Welcome to my world in 1993. I was 14, a HUGE Take That fan and insecure about EVERYTHING. The diary entries were short and snappy, I spent a lot of time with my best friend at the time, and I had an opinion and EVERYONE and EVERYTHING

I’ll be posting a month by month account so you can really get into it. If you were a girl growing up in the early 90s I reckon a LOT of this will resonate with you. Enjoy the ride 🙂

The babysitting was really great it made me feel so grown up. I got 5 pounds out of it. Sheila and I stayed awake till about 2.30 talking about Take That. I’ve watched the video so many times I feel as though I know them, especially Mark. I love him dearly.

Went to Chippenham today. I bought: simply red nail varnish, plum port lipstick, Take That ‘Could It Be Magic’ CD single, My Guy, and Big. Remember: On Wednesday to get Smash Hits, Just Seventeen (?), Fast Forward.

School tomorrow. What a drag. One of New Year’s Resolutions was to try and be nicer to people, so the test will be tomorrow. I decided that on your every page I’m gonna draw or write something to do with Take That. They are my biggest ever heroes.

SCHOOL! It wasn’t that bad actually. We all told each other what Chrissie presents we got: Claudia – walkman, Mary – Mr Bean’s Diary, Petunia- walkman, Timothy – clothes, Wilfred – walkman, Sheila – long mirror. Sheila and I were doing the Take That rap!

I can’t get Take That out of my mind. I think about them all of the time, even in lessons. A new boy came today from Scotland. He doesn’t look very nice, but then looks aren’t everything. Petunia fancies Timothy again. The trouble is she never does anything about it.

I got the Take That poster from Smash Hits today and yep it’s already on my wall. I think Claudia is jealous because I’m getting so friendly with Sheila. She keeps saying sarcastic remarks like, “She’s probably with Sheila”. “When you going to her house again” etc. I’m beginning to hate her.

We did clay today in art and I’m so crap at it. Everyone else’s looks like what it’s supposed to, but mine still looks like a lump of clay. I’m so unsure of my self. I continually think that people are laughing at me behind my back. Maybe they are? Exercises = 20 mins.

We’re all driving to youth club just to see whether it’s on. I’ve got to phone Claudia and Sheila’s phoning me. Claudia said she might not go because Percy isn’t. She said it wouldn’t be any fun. Oh great, so she’s saying we’re boring. Had a dream that Mark Owen came to our school.

We did end up going to youth club. Me and Sheila went up the field and started shouting “MARK IS LUSH” (me) “HOWARD IS SEXY” (Sheila). Timothy was getting well jealous because he fancies Sheila. Went to Chippenham to look for shoes in the sale. They didn’t have my size. Great.

Played badminton today. I wore leggings and was very hot, but hopefully it wore away a few pounds. I’m determined to get fitter. Cleaned the animals out in the garage because of the rain. Thumper broke one of her toenails and it bled. Listened to ‘Take That And Party’.

Had cooking today and she demonstrated how to make Cauliflower Cheese and we’re making it on Thursday except most of us are on a History trip. Then next Monday we make Savoury Layer Pie using corned beef but I’m using TVP if mum can get it. Going to Sheila’s tomorrow.

Went to Sheila’s today and she put a bead in my hair. She asked whether I could stay the night Wednesday and then they’d take me to school for the War Museum on Thursday but I don’t reckon mum will let me. Find out later what the answer was!

The answer was no, but I think it’s for the best. I got 4 magazines, 3 of which all had something about Mark in. I’ve got stickers and 2 posters. I’ve used all the Take That stickers so here are the ones I haven’t used (at the back).

We went to the Imperial War Museum today. It was OK, a bit boring. The bus broke down on the way back so we had to wait at least an hour before another one came. I sat next to Sheila who was in a reg with Noreen because she’d blamed her for making her sit next to Petunia.

Sheila’s coming over tomorrow and staying the night. We are going to be organising and running Graham’s birthday party so we’ve got to invent games and make masks etc. I feel really tired from getting back so late yesterday and I had to get up to have a bath.

Sheila came over today. We made 12 party masks and 2 pass the parcels and a pin the teeth on the rabbit. We kept eating all the chocolate that we should have been using, so we’ve got to think of an excuse.

Last night we stayed awake until 11.45 playing love games about Take That. I married Mark Owen and massaged his bollocks. Next Saturday me and Sheila are going shopping to get a dummy. We’re going in Oxfam so if anyone sees I’ll die.

I got 9 1/2 for my Savoury Layer Pie, just because the cheese wasn’t brown enough. GREAT. We did the love game at school. Percy ended up loosing his virginity with Tommy which everyone laughed about.

After school me and Sheila walked into town and bought 2 dummies. Mr Goman saw me buying them and said “I thought you’d outgrown them”.  If he says anything in class tomorrow I shall die. The dummies are really nice and I’m gonna put mine around my neck to look like Robbie.

Me and Sheila were sitting in History shitting ourselves. I’m sure he picked on us more than usual, he didn’t mention the dummies though. I put mine on the end of some plaited embroidery threads and it looks really cool.

Sheila has made herself two chokers out of ribbon. She’s making me a white one with embroidered black zigzags and tiny blue beads. I hope it turns out good because I’ll wear it for youth club tomorrow. I’m sending off for more information about the Take That fan club.

Sheila gave me my choker, it’s OK but I don’t know whether I’ll wear it or not. Went to youth club, fairly boring. A’s found out I’ve got a dummy, if he tells mum I’ll kill him. Going to Sheila’s tomorrow and we’re babysitting. Then on Sunday we’re doing Graham’s birthday party so hopefully I’ll have lots of money by the time I’ve finished.

Went to Swindon with Sheila, Rose, Stan, Geraldine and Graham. Geraldine gave me and Sheila 10 pounds for babysitting and doing the party in advance. I bought a cross necklace, ring, flannel, ye gel, shower cap. We made the chocolate medals and jellies at Geraldine’s tonight.

It turned out OK. A few of the kids were quiet but soon came out of their shells. Winnie went to hospital so will probably have her baby tonight. A didn’t finish the cross country race so I’ve been told not to say anything to him. I wish he’d finished it.

Made pizza today and got 9 1/2 out of 10. Went down the shop to buy Fast Forward because Timothy said it was out and had a Take That poster in it, only to find it wasn’t out yet. So I bought dolly mixtures and 2 cream eggs. I’ll get it on Wednesday with Just Seventeen hopefully.

Stayed at Sheila’s the night. We made up some gelatine with oranges in. We used our hands to eat it and a race to see who could eat it the quickest. Winnie  had her baby on Monday, a boy called Chaz. Sheila’s going to visit him and Winnie on Thursday. Thought I was gonna get my maths test results back but he hasn’t marked them yet.

Everyone who likes him have sung happy birthday. My shoes came today. They are so lush. I’m ordering cut off dungarees and a black dress.  I’m going to enter a competition where the prize is to meet Take That and appear in Hanger 17 with them. I hope I win. I’d just die to be able to see them let alone talk to them.

I need to answer 1 more question. Hopefully I’ll be able to get the answer off of Jill tomorrow. Please! Got 38 out of 70 in my maths test. GREAT! (not) I feel so sorry for Take That because Kim Bishop likes them. She even licks posters of them. Sad, isn’t it. The animals really smell, they haven’t been cleaned out for about two weeks so they’ve definitely got to be done on Saturday.

The answer is “Tom Orange” mind you they also mentioned Andrew, but I think Tom’s more convincing. Tomorrow I’m going into town to buy the East 17 single ‘Deep’. It’s really good. I got some things from CTG today. Raffle tickets Sheila’s put mine down on hers so I’ll phone her to see if she want’s me to put her down on mine. I hope my dungarees come through tomorrow!

Here is a list of what I bought: ‘Deep’ (East 17), Big!, 50 blank postcards (I wonder why), 20 clear plastic folders, 2 Cadbury’s cream eggs, Runts and chewing gum. Mum bought me a bag. I was on the phone to Sheila for at least half an hour! On Monday I must remind Mum to get me a first class stamp and on Feb 10th to get Big (Mark Owen poster).

Today has been so boring. I’ve watched my two videos of Take That, listened to all my decent music and done more than enough homework. I’m getting so worked up about this competition and I haven’t even sent it off yet. But I know deep in my heart that I haven’t really got a chance of winning this or ever meeting them. I suppose I’ll just carry on dreaming!

REMEMBER TO COME BACK NEXT MONTH! 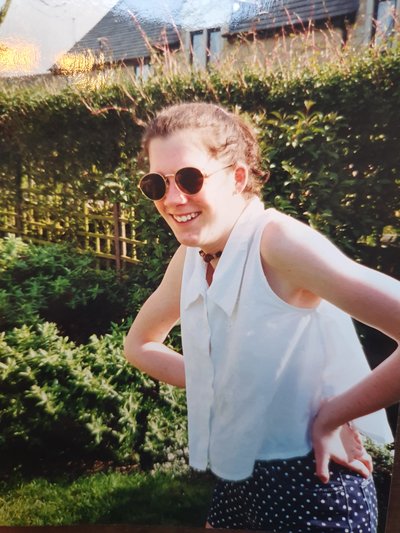 If you can’t wait, then fear not as you could jump ahead and check out my weekly 1994 diary extracts over on my website, or get a little taster over on my Facebook page.

*Names have been changed to protect the not so innocent

Phones generally get a bad rap when it comes to our health and wellness. We quite often hear about how we’re all spending too…