With only a couple of days left until Christmas and with the kids finally finishing school I fully intend on doing a spot of festive baking this weekend. And while I will of course be making the usual gingerbread biscuits (because it would be a Christmas crime not to) there are a few slightly different recipes I’ll be dipping into as well and I wanted to share my favourites with you all Obviously flapjacks feature (a lot!), but there are also some fab cocktail recipes and some delish cupcakes for you to try out as well. 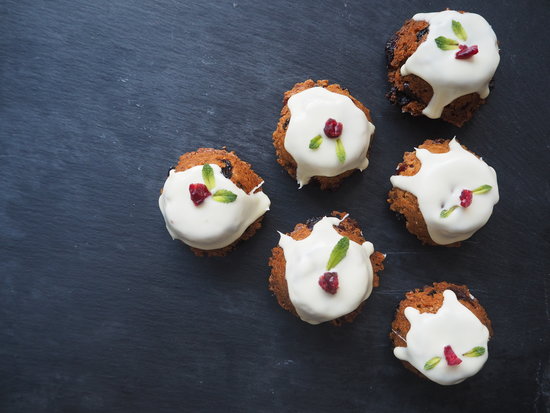 Points for cute factor have to go to these fruity flapjacks decorated to look exactly like miniature Christmas puddings. And they’re so easy to make with the kids.

Simply melt 150g of unsalted butter in a saucepan along with 150ml honey. Stir in 50g each of raisins, currants, dried cranberries and mixed peel and heat until the fruit has plumped up. Spoon into the greased holes of a mini muffin tin and bake for 15 mins at 180ºC. Allow to cool in the tine before removing. Once cool, turn the flapjack puddings upside down and drizzle melted white chocolate over the top of them so that it resembles icing. Decorate with chopped cranberries and mint leaves so that it looks like holly. 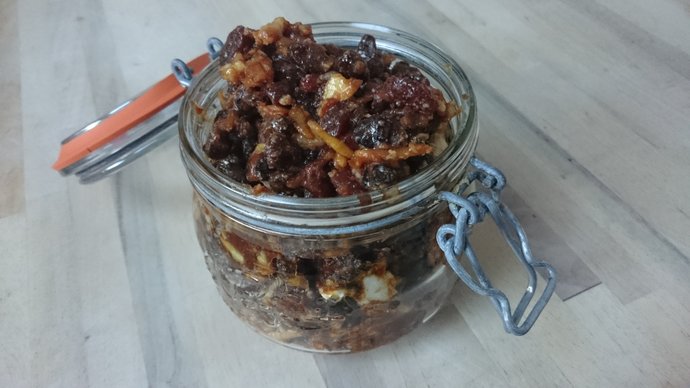 I don’t care what you say, but homemade mincemeat is one hundred times better than any of the shop bought jars you can get. And although it takes a little bit of time to absorb flavours and get it tasting just right, essentially all you need to do is bung the ingredients together and leave them to work their magic. I’ve used unrefined coconut sugar instead of standard granulated sugar and I have replaced suet with some coconut oil. Here’s how you make it:

Core and grate 1 apple, I leave the skin on for extra bite and to help pack in more nutrients. Tip the grated apple into a bowl and mix together with 50g each of sultanas, currants and dried peel, 100g of raisins, 50g of coconut sugar, 3 tbsp of coconut oil and 50ml of ginger cordial or ginger wine if you want a bit more of a kick. Once everything is combined, spoon into sterilised jars and leave for a good few days to allow the flavour to fully develop.

Perfect in mince pies, to top festive porridge bowls and in my recipe for Mince Pie Flapjacks (below). 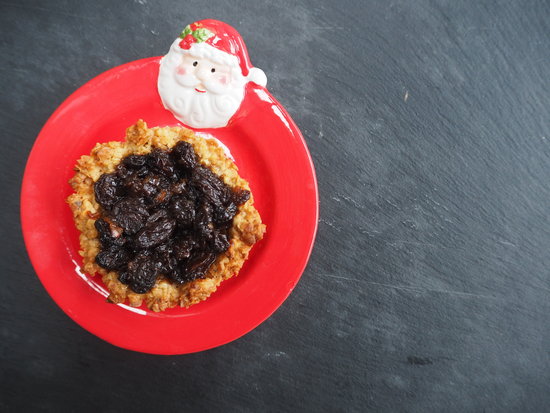 Seriously one of my best recipe inventions from last year, I mean come on…. a mince pie masquerading as a flapjack… baking goals right there!

Melt 150g of unsalted butter in a saucepan and stir in 150ml honey until combined. Remove the pan from the heat and stir in 300g of porridge oats. Spoon into the greased holes of a cupcake tin, making a little dent in the middle with the back of a teaspoon. Bake at 180ºC for 15 minutes. If the flapjacks have risen a little, press gently over the holes with a teaspoon again. Leave in the tin until completely cool and then carefully remove. Spoon mincemeat (see recipe above) into the holes and there you have it – Mince Pie Flapjacks. 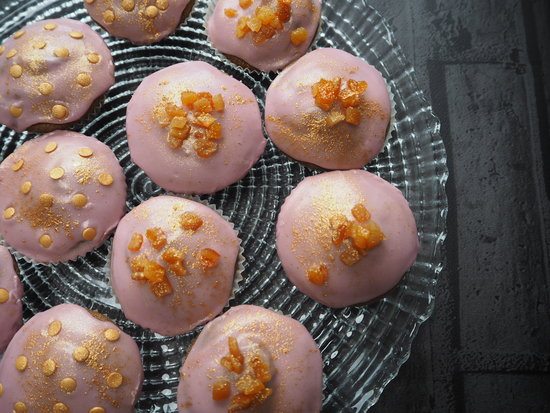 We shared this recipe last Christmas when our fave foodie Anupreet Attridge kindly sent it our way and we just had to make them again this year as they are beyond amazing!

Preheat your oven to 180ºc and line a 12 hole cupcake tin with cake cases. Cream together 160g of caster sugar with 250ml soya yogurt until smooth. Add 125ml of sunflower oil and 2 tsp of orange zest and mix well to combine. Sift together 200g of self-raising flour, 2 tbsp of cornflour, 1 tsp of ground nutmeg, 1/2 tsp of ground all-spice, 1 1/2 tsp of ground cinnamon, 1 tsp of baking powder and 1/2 tsp of bicarbonate of soda and then add to the wet ingredients in three parts, stirring well in between adding. Mix in 4 tbsp of dry red wine (a Merlot is perfect) until the mixture is smooth and free of any lumps. Spoon the mixture into the cupcake cases so that they are roughly 3/4 full and then put in the oven to bake for 25 minutes. Once cooked, leave to cool on a rack. To decorate, sift 250g of icing sugar and stir in 3 tbsp of red wine a little bit at a time, while continuously stirring to achieve the right consistency. You should end up with a slightly runny, smooth and glossy pink icing. Drizzle the icing over the tops of the cupcakes so that they are completely covered and decorate with some candied peel, a sprinkle of orange zest and a dusting of cinnamon and edible gold dust. 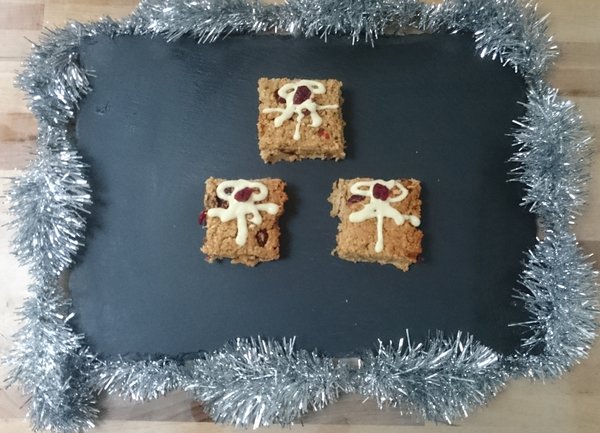 This is a great one to let the kids loose on, as they absolutely love coming up with ideas of how to decorate these oaty presents.

Start by greasing the holes of an individual brownie tin and preheating the oven to 180ºc. Melt 200g of unsalted butter in a saucepan and stir in 250ml of honey. Add 75g of dried cranberries and 75g of pistachios and heat gently until the cranberries have softened and plumped up. Remove the saucepan from the heat and stir in 500g of oats. Spoon the mixture into the squares of the tin and bake for 20-25 minutes or until the tops are golden. Leave the flapjacks to cool in the tin before carefully removing with a palette knife. Decorate with either melted white chocolate or icing to create a ribbon effect and top off with a dried cranberry. Let you imagination run wild and decorate your flapjack presents however you like – it would be great if you could send us a picture! 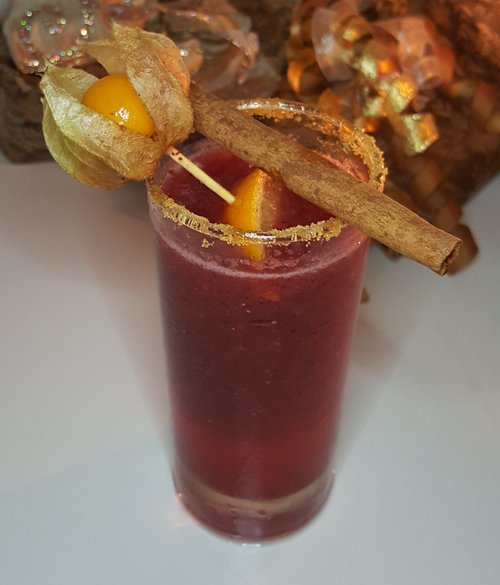 Here’s another one from the fab Anupreet Attridge, who came up with a rather clever idea for a cocktail that is inspired by the song ‘The 12 Days of Christmas’. See how many you can spot!

Dip the rim of a tall tumbler (12 Drummers Drumming) style glass in sugar syrup (made by dissolving sugar in water) and then dip in edible gold sugar (5 Gold Rings). Fill the glass with crushed ice and pop to one side while you prepare the drink. Pour 25ml of Gin, 25ml of Grey Goose Vodka (6 Geese a Laying), 25ml of French Brandy (3 French Hens), 45ml of Cranberry Juice and 60ml of Peartiser (Partridge in a Pear Tree) in to a cocktail shaker. Roll a whole lime on a flat surface to help break up the segments and then squeeze a 1/8 wedge into the cocktail mixture. Do the same with the orange, but this time squeeze 1/4 of a segment. Add a pinch of ground cinnamon and some crushed ice, pop on the top of the cocktail shaker and give it a good old Tom Cruise style shake! Strain into the glass, taking care not to disturb the sugared rim. Cut a wedge of Orange and pierce it onto the end of a cocktail stick (7 Swans a Swimming). Insert a whole Physalis on the other end of the stick and curl the leaves out so that it resembles a dress (9 Ladies Dancing). Place the fruit stick orange end down into the drink, allowing the physalis to rest on the side of the glass. Finish up by swirling the drink with a Cinnamon Stick (11 Pipers Piping) and then drink and be merry! 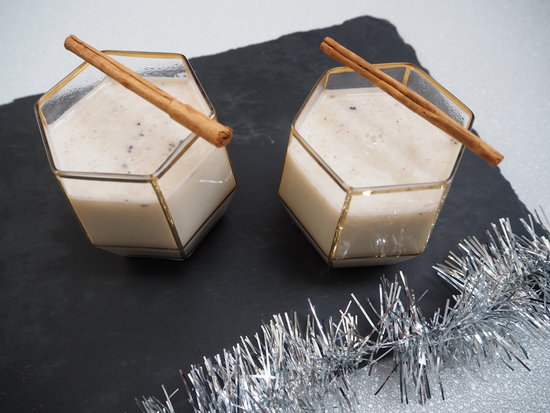 This one’s perfect for the vegans among you, or if you’re someone like me who thinks the idea of adding an egg to a drink is just a bit bleurgh! This recipe is enough to make two drinks worth and can easily be scaled up or down depending on how many you need.

Pour 400ml of Almond Milk, 3 tbsp Maple Syrup, 1 halved Vanilla Pod, 50ml of Rum, 1/2 tsp of Ground Nutmeg, 1/4tsp of Ground Ginger and 1/4 tsp of Ground Allspice into a saucepan and heat gently until bubbles start to form at the side. Carefully pour into glasses and serve with a dusting of Cinnamon and a Cinnamon Stick stirrer. 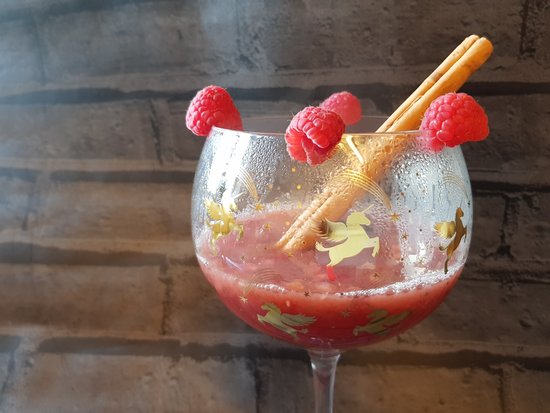 If you fancy something a bit different and your tummy could so with a little break from alcohol, then why not give our recipe for Mulled Kombucha a go!

Pour your fave bottle of kombucha (something berry flavoured and red works a treat) into a small saucepan. Add 1 Star Anise, 2 heaped tbsp of Pomegranate Seeds and a whole Cinnamon Stick and heat gently until bubbles form at the edges of the pan. Carefully pour into a pretty glass and serve with raspberries.

So there you have it folks, my top festive recipes to up your foodies game and my rather lame attempt to try and make Christmas just that little bit healthier 😉 Well…. it is Christmas!

A common goal for dieters is to increase their metabolic rate. However, the rate at which your body will burn calories depends on various…